In the two years since it was enacted, the REACH regulation has become an example to governments across the world. Dave Keating reports on a rush of new chemicals rules about to sweep Asia and North America

The global chemical industry was anxiously bracing itself for the coming storm in June 2007. As the EU’s new registration, evaluation, authorisation and evaluation of chemicals (REACH) regulation went into effect, it wasn’t just European chemical manufacturers and downstream users who were speculating over how they would be affected. Because the law also applies to importers, producers worldwide had to take notice.

The EU’s restriction of hazardous substances (RoHS) directive a year before had a big impact on other regulatory systems globally. Many wondered whether the same would be true for REACH. Today, the regulation’s effects are seen in new legislation sprouting up across the world.

According to DaeYoung Park, a managing partner with environmental compliance firm Young & Global, more than half of the 560 chemical policies and regulations amended and adopted between January 2008 and January 2009 were from outside the EU.

The first major overhaul of American chemicals legislation in 30 years is expected to be unveiled in the US senate next January. Chemicals have been chiefly dealt with in the United States through the Toxic Substances Control Act (TSCA) of 1979. NGOs have long complained that the law hasn’t been re-examined since then, and it has been rarely enforced.

The act gives the Environment Protection Agency (EPA) authority to register and ban chemicals of concern, but a recent report from the Government Accountability Office found that out of 62,999 existing chemicals in 1979, the EPA has only required testing for 200. Since TSCA was enacted only five chemicals have been banned, all before 1990.

The EPA has complained of under-resourcing, and of the burden of having to prove a chemical is unsafe, rather than the manufacturer having to prove it is safe. The TSCA does not require chemicals producers to generate information on chemical uses, health effects or exposures.

In response to inaction at the federal level, individual states have started to take their own measures. In 2003 California banned penta- and octa-brominated diphenyl ether (BDE), followed by ten other states. Five years later, California launched its Green Chemistry Initiative, a comprehensive approach to chemicals modelled on REACH. Stronger follow-on legislation is being considered – which has many in industry concerned.

Other individual chemical bans and restrictions have been enacted in states such as Maine, Vermont and Oregon, creating a patchwork of conflicting chemicals law in one common market. There are many similarities to the conditions in Europe that triggered the REACH debate.

“The California proposal is kind of a blunderbuss going after 10,000 chemicals,” says Ernie Rosenberg, president of the Soap and Detergent Association. “As big as it is, if California is standing out there alone with restrictions, it

runs the risk that the products will simply be withdrawn from that market.”

She knows California cannot be stopped in its tracks, but hopes that “a credible federal law” will dissuade states from going it alone. “We don’t want 50 states taking their own action on products that should be able to travel freely throughout the US,” he adds. 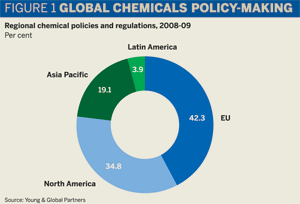 Despite many complaints, no credible alternative to the current system has been presented up until now, Mr Rosenberg says. “Now that REACH has shown an alternative model, suddenly TSCA reform looks more feasible.”

In the past few months momentum has been gathering. In September the Obama administration unveiled principles for US chemicals policy reform, proposing that manufacturers be required to submit data as in REACH and that the EPA act on priority chemicals.

These recommendations have been incorporated into a new bill proposed by Democratic senator Frank Lautenberg, which was due to be outlined in a hearing on 2 December as ENDS Europe Report went to press.

It is the first time any serious reform of the TSCA has been proposed in the US congress, and it mirrors much of REACH. It would shift from a hazard-based to a risk-based approach, reverse the burden of proof of a chemical’s safety to producers and institute a data-sharing registration programme that would help the EPA decide which chemical uses to restrict or ban.

So far lawmakers have been encouraged by how much agreement exists between NGOs and industry. Both share concerns over inconsistent enforcement and the lack of data sharing, and both agree on the need for a prioritisation mechanism.

However a major battle is shaping up over whether the new legislation should mirror the REACH system and register all chemicals, or whether it should more closely follow the Canadian system and require registration for only the chemicals of highest concern.

Under amendments to the Canadian Environmental Protection Act adopted in 1999, the government has gone through existing data for the entire inventory of about 23,000 chemicals and found 500 substances of concern, most of them persistent, bioaccumulative and toxic. Only those chemicals need to be registered by producers. The Canadian government is currently issuing calls for registrations in batches of 100 at a time.

NGOs are trying to convince the US congress that the Canadian approach is flawed because it relies only on existing data without requiring much of anything from industry. It also is more geared toward importers because the country does not have many producers.

“Canada did the best they could with the paltry info in hand,” says Daryl Ditz, chemicals expert with the Center for International Environmental Law. The US chemical industry seems content to have thousands of chemicals that lack data remain out of the reach of law – innocent until proven guilty,” he adds.

“Environmentalists think all chemicals need to be registered eventually, but that’s a non-starter in the US,” counters Mr Rosenberg. “We’re saying don’t do what Europe did, making every chemical go through registration, or it

will be like a pig travelling through a pipeline. Why not just take the 5% you’re really interested in and not make everyone go through this costly administrative nightmare of substance information exchange forums and consortia.”

According to Mr Rosenberg, industry has eight working groups developing recommendations for what the safety standards should be. Both sides will be lobbying congress in the coming months. There will likely be plenty of time for debate.

The same committees handling TSCA reform are also dealing with climate change and healthcare reform, which will both occupy congress. Environmental law in the US is usually passed in an election year, and given that TSCA reform is unlikely to be ready by 2010, pen is not likely to be put to paper for any reform until the next election year in 2012.

It is certain that no new chemicals regime will be in force before the European REACH dossiers have already been submitted. This means that whatever TSCA reform passes in the US, much of the submitted data will likely be based on those dossiers. Similarly, any TSCA reform is guaranteed to end the prohibition on US data sharing, so REACH data is likely to be augmented by further tests conducted in the US.

Not all legislation moves as slowly as in the US. In Asia, new regulatory regimes that resemble the REACH structure have been sprouting up. Earlier this year Japan made two big moves to change its chemicals regulation. The government adopted new amendments to its law on the control, evaluation and manufacture of chemical substances.

Like REACH, it changed the regulatory system from a hazard-based approach to a risk-based approach using a phased-in system. The changes include notification of all existing chemicals over a certain threshold quantity as well as new chemicals.

REACH may also influence an expansion of the Japan Challenge Program, which in 2005 began collecting and sharing existing details for high-production volume chemicals. “There will be continuous evolution and amendments in subsidiary legislation,” says Mr Park, adding that upcoming legislation will contain further details on chemical exposure, risk assessment, classification of chemicals, collection of hazard data and solutions for confidentiality issues.

Across the Sea of Japan, South Korea has this year unveiled new chemicals measures of its own. In June the government proposed amendments to its Toxic Chemicals Control Act. They would require manufacturers, importers or sellers of chemicals to communicate information on restricted or banned substances to customers. Under the proposal, the ministry of environment would publish a candidate list of severely restricted or banned substances.

In February the Korean government unveiled its new Green SHIFT (safety, health, information, friendship, together) plan, introducing new tests and guidelines. It will also require mandatory submission of hazard data, exposure information of existing chemicals and establish chemical data collection through the high production volume programme in 2010-12. A month later South Korea announced it would amend the public notice on the classification and labelling of toxic substances.

Despite a long history of chemicals legislation, China lacks significant enforcement measures. In May the Chinese government proposed an amending draft to existing measures on the environmental management of new chemicals substances, which would introduce a risk management concept into the control system.

New chemicals would be classified as general chemicals, hazardous chemicals or chemicals of environmental concern. But the details of this plan still need fleshing out: the new regulation is four pages long, compared to the 800-page REACH regulation.

Climate summit: Copenhagen Accord in detail

EU left on sidelines in last hours of Copenhagen

Get more great articles like this straight to your inbox. Find out more about our weekly bulletins

Latest news, analysis and insights on the flagship plan to decarbonise Europe by 2050